Looking to insure your vehicle? There are plenty of reputable auto insurers to choose from, but honing in on your best option takes careful consideration of the type of coverage you want. Nationwide is known for insurance, financial services and for their slogan “being on your side.” Nationwide is one of the largest insurance companies in the world, but are they really on your side?

One of the more expensive insurance providers depending on your financial history and vehicle, Nationwide auto insurance is ideal for car owners who are looking for a number of specific qualities. These include long-term savings, accident forgiveness, and an annual assessment to make sure they’re receiving the discounts for which they’re eligible. While the value of their services for the considerable raters is up for debate, Nationwide stands firm as a reliable auto insurance option.

What is Nationwide auto insurance?

Their auto insurance policies check the basic boxes one would expect an auto insurer to offer policyholders, not to mention a few unique benefits like free annual assessments, gap insurance, and vanishing deductibles. Another of Nationwide’s strengths? Their Office of Customer Relations, which strengthens the line of communication between the company and its customers and contributes to their overall positive ratings. Although keep in mind that even though Nationwide has a dedicated customer relations team, they are often outscored in customer satisfaction by other insurers in their space.

Nationwide is a reasonable choice for car owners looking for a variety of coverage plans. That being said, it is especially appealing to low-risk drivers, new drivers, and families due to their discounts and incentive programs.

How does Nationwide auto insurance work?

If Nationwide is sounding like a good option for your specific auto insurance needs, the next step is to sign up online. Here’s what each step of the process looks like.

Get a quote in under seven minutes

Once you’ve landed on the Nationwide homepage, you’ll see a purple box on the right side of your screen if you’re on a desktop computer. Under the heading “Get an Online Quote,” you’ll want to select “Auto” and enter your zip code to begin the process. 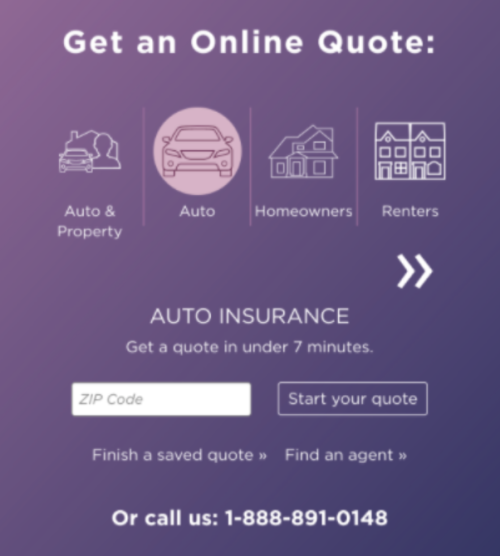 After starting your quote, you’ll be redirected to the Nationwide Express page to answer some questions about yourself. Enter some basic information like your full name and state of residence to get started. Make sure “Auto” is selected under the insurance options. 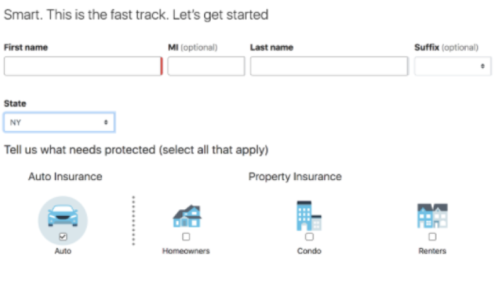 Give a little more information

Next, the Nationwide site will prompt you to fill out further personal information. You’ll also need to select an accurate description of your driving history. It pays to be honest here, as you’ll want the most accurate estimate of the cost of insuring your vehicle through Nationwide before committing. You’ll choose between “Excellent,” “Pretty good” and “Needs work” as categorical descriptions of your driving history. 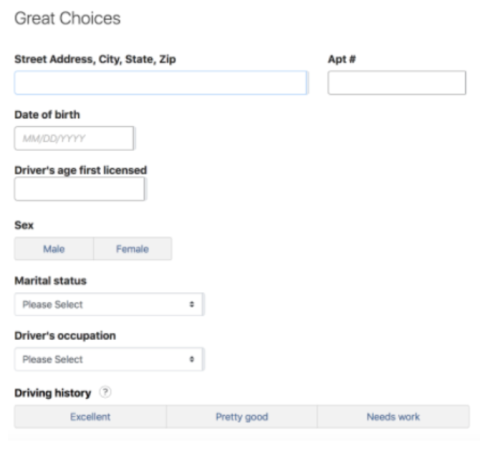 Once you’ve followed the steps to obtain your online quote, you’ll have the information you need to either go forward with Nationwide or choose a different insurer. If you need assistance, or don’t feel comfortable inputting your information on the Nationwide website, you can reach an associate at 1-888-891-0148.

How much does Nationwide’s car insurance cost?

Insurers usually use a list of qualities to help them determine the cost of an auto insurance package, and that list often overlaps with other auto insurers. For example, Nationwide considers age, location, driving record, car make and model, eligibility for discounts and policy limits when determining the cost of auto insurance.

Nationwide’s website cites the American Auto Association’s statistic that an average size sedan was about $1,222 annually to insure in 2016. That being said, Nationwide emphasizes the factors that either raise or lower auto insurance rates as integral to determining the final quote.

Of course, your car insurance quote will depend on the insurance coverage you need. Here are some estimates of Nationwide annual rates based on plan coverage:

If you’re looking for the most basic car insurance package, you could consider your coverage in the low range. Minimal coverage under Nationwide averages about $1,861.06 annually, depending on a driver’s record, vehicle and other determining factors.

So what makes Nationwide stand out from competitors? Their incentive programs and unique coverage options can be a make or break for car owners.

If your car is stolen or completely totaled, gap insurance can be a lifesaver–and it isn’t offered by all insurers. Gap insurance pays the difference between the value of your car when the accident occurred and the remaining balance on your loan or lease. Some lenders even require gap insurance, which moves Nationwide to the top of the rankings for some consumers.

If you’re a safe driver, the vanishing deductible discount is your reward through the company's safe driving discounts. For every year you go without having an accident, your deductible drops by $100 and caps at $500. The potential savings could make Nationwide the most financially attractive insurer over time.

On Your Side Review

Being overcharged by insurance providers is a prevalent concern amongst car owners. What happens if you agree to a particular plan and end up overpaying year after year? Nationwide’s On Your Side Review acts to make sure that doesn’t happen. Every year, or after a major life event, they offer a free assessment to help determine if your plan is still right for you. The On Your Side Review also vets participants for discount eligibility for benefits they might not be already receiving.

Who is Nationwide’s auto insurance best for?

Nationwide has options for car owners with different needs. That being said, it tends to be best for people with a specific set of qualities.

Nationwide’s vanishing deductible program can result in big savings but adds up over time. For this reason, Nationwide is probably best for those looking to choose an insurer and stick with them for the foreseeable future. They emphasize this point on their website, saying “we insure members for a lifetime.”

Nationwide offers accident forgiveness, which helps car owners dodge any rate increases after someone on their policy has a crash. Parents with teenage or new drivers on their plan tend to like this perk, as it lowers the risk of insuring multiple vehicles. Keep in mind, this specific policy is not available in all states. Additionally, Nationwide will only forgive one accident on any given policy.

Who shouldn’t use Nationwide’s auto insurance?

While Nationwide has its positives, it’s also not the best option for everyone.

Some insurance companies allow rideshare drivers to add rideshare insurance to their personal coverage plans, as companies like Uber and Lyft often don’t provide this to drivers. If you’re a rideshare driver, you might want to consider State Farm, GEICO, Allstate, Progressive, Mercury or Farmers auto insurance instead.

Individual car owners aged 25 or under

When compared with other auto insurers, Nationwide had one of the highest rates for the 25-year-old driver profile. If you’re a younger driver, you might want to look elsewhere for a more wallet-friendly option.

Making a pro and cons list can give you clarity on what you need from an insurance provider, in comparison to what you’re willing to compromise on. While not everyone has the same pros and cons on their list when it comes to auto insurance, here are a few of the common advantages and disadvantages of getting auto insurance with Nationwide.

Nationwide doesn’t tend to penalize those with low credit

Drivers with low credit tend to be charged more for insurance, or not given the same discounts as those with high credit. Nationwide tends to keep rates affordable for car owners with lower credit scores.

The difference in rate between drivers who have an annual mileage under 6,000 miles and those who exceed that range is minimal with Nationwide. In fact, in some cases, it averaged to be around $15.

Nationwide’s vanishing deductible is a positive incentive to go with the company and stay with them. If you’re a low-risk driver looking for a long-term insurance provider, Nationwide could be a good choice over time.

Many insurance companies are developing more flexible companies for rideshare drivers, but Nationwide isn’t one of them. If you’re thinking that ridesharing could be part of how you cover your bills now or in the future, this could be a major con.

If you have a bad driving history, Nationwide can be expensive

Speeding violations and accidents will raise your expected rate significantly, and a DUI could even double it. Ask your representative how a flawed driving record could impact the cost of your coverage.

In the 2020 J.D. Power study, Nationwide ranks below many of its competitors when it comes to customer satisfaction. The study breaks the country down by regions, and Nationwide consistently scores below average in each region. For example, in California they had a score of 797 out of 1000 points. The industry average for California was 821. In the central region, they finished with a score of 815 out of 100. The industry average in that region was 843. This trend holds throughout the study.

Here’s what Nationwide looks like when you compare them side-by-side to their competitors.

When compared to Farmers, Nationwide often offers better rates to those with poor credit and teen drivers. However, Farmers does have a student away at school discount, which Nationwide doesn’t offer and which could be attractive to families with children in college. Farmers also has additional discounts that Nationwide doesn’t offer such as a discount for green vehicles. Plus, Farmers consistently ranks higher in customer satisfaction studies.

Nationwide is known for giving better rates to drivers with poor credit. Even though GEICO is known for discounted rates, Nationwide is often still more competitive for this demographic. When it comes to discounts, the two companies are well-matched although GEICO offers a military discount while Nationwide does not. Even though Nationwide’s customer service ranks below average, they rank higher than GEICO this area, which could be a selling point.

Read our full review of GEICO.

Still have questions about getting Nationwide auto insurance? Here are some of the most commonly asked questions, and their answers.

Nationwide is a large insurer that offers services throughout the country, with a solid financial rating and slightly below average customer service rating. Reviewing the advantages and disadvantages of their policies can help you determine if they are a good insurer for you.

Are Nationwide and Allied the same company?

Yes, Allied and Nationwide merged in 1998.

When reviewing discounts, seek out multi-policy discounts for bundling a number of insurance products like homeowners with your auto.

Is Nationwide right for you? Look at the elements that complete your driver profile, including past accidents and your age demographic, to determine whether or not you’ll be eligible for a lower rate. It never hurts to get a quote on the Nationwide website, which is a quick and easy process meant to give you an idea of your annual rate. An agent can help you determine which benefits and discounts apply to you specifically, and the estimated cost of your auto insurance. After that, be careful to weigh the pros and cons of getting a rate with Nationwide. It’s a good idea to shop around online and compare other quotes before committing to one auto insurer.

Please wait while we redirect you.

How to Submit a Renter's Insurance Claim