Insurance
BY: Joy Wallet
| Last Updated: September 30, 2020
EDITOR RATING
Here at Joy Wallet, we pride ourselves on values like transparency and honesty. In the spirit of upholding that, we want to let you know that this post contains sponsored links from our brand partners, who have all been carefully screened, selected and evaluated.
EDITOR RATING

Play the lottery regularly and you could find yourself in a financial hole. Spending just $10 a day on lottery tickets adds up to $3,650 in a year.

Wisely, the average person doesn’t spend that much playing a game that can have odds as high as 1 in 302.5 million to win the Mega Millions jackpot. The average person spent $220 on lottery tickets in 2017, according to one study.

There are ways, however, to make some money without having to take a chance on winning the lottery.

And you can sharpen your gaming skills while trying to make some money too.

Mobile apps such as Solitaire Cube, Blackout Blitz and Jewel Blitz allow players to pass the time and potentially win some real money while playing against other people online. Here are a few games to try: 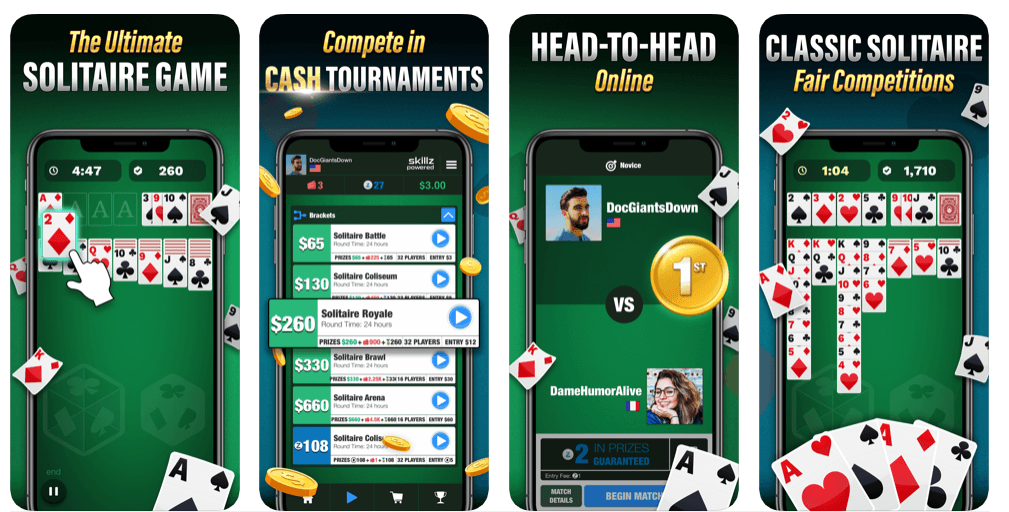 If you’ve played the game solitaire, then Solitaire Cube is up your alley.

One of its top performers won $380,980 playing the game on her phone. Your results may not be as great, but it’s worth trying.

The game hosts tournaments where players pay $1 to thousands of dollars per entry to play.

To start, download the app from the app store. You set up an account and are given some free practice rounds to play.

Tickets are earned that can either be turned into cash or you can deposit cash to begin playing in their cash tournaments.

Read our full review of Solitaire Cube here, where we offer tips on how to improve your chances of winning.

Bingo isn’t usually thought of as a game of skill, but this popular Bingo style game pays off in cash prizes for players with the best concentration, speed and strategy.

Blackout Bingo games take only about two minutes to play, so you can try to earn some money with a quick game when you have some downtime. You can pick up and play whenever you like.

The game is part of the Skillz network, which pays real-life money to winners.

Players must invest money to make money, but there are some ways to win money for free without spending money on the game.

One way is trading in tickets won as loyalty points in Blackout Bingo and other Skillz games. Some prizes include bonus cash, and you won’t have to deposit money in order to redeem tickets for bonus cash.

Free cash can also be earned by giving your promo code to other players. For each person who uses the code and deposits money in the game, you get $10 for free. By using your promo code, they also get free money. 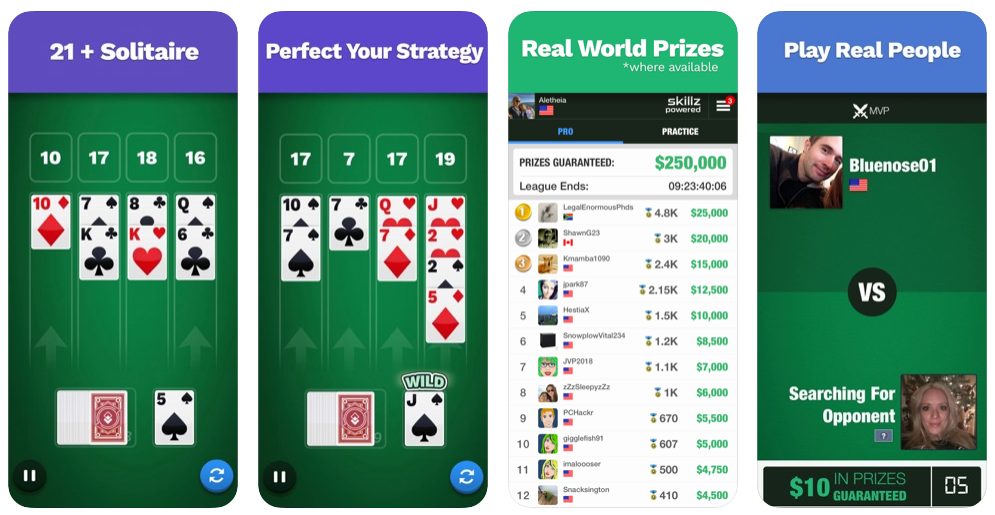 This is another gaming app in the Skillz family where money can be won.

Players go head-to-head in 21 Blitz or can play tournament style. The game is a mixture of blackjack and solitaire. Here’s how it’s played:

A deck of 52 cards plus two joker cards are used. The joker is a wild card that will earn you bonus points.

There are four rows with three chances for error. The object is to get the highest store in three minutes or until you run out of cards.

When your hands equals 21, the row clears and points are added to your score. Bonus points are awarded for scoring 21 consecutively across multiple rows.

If you go over 21, you bust and receive a strike. That row clears, allowing you to try again.

Tickets are earned by playing and winning, and can be redeemed for prizes and cash. 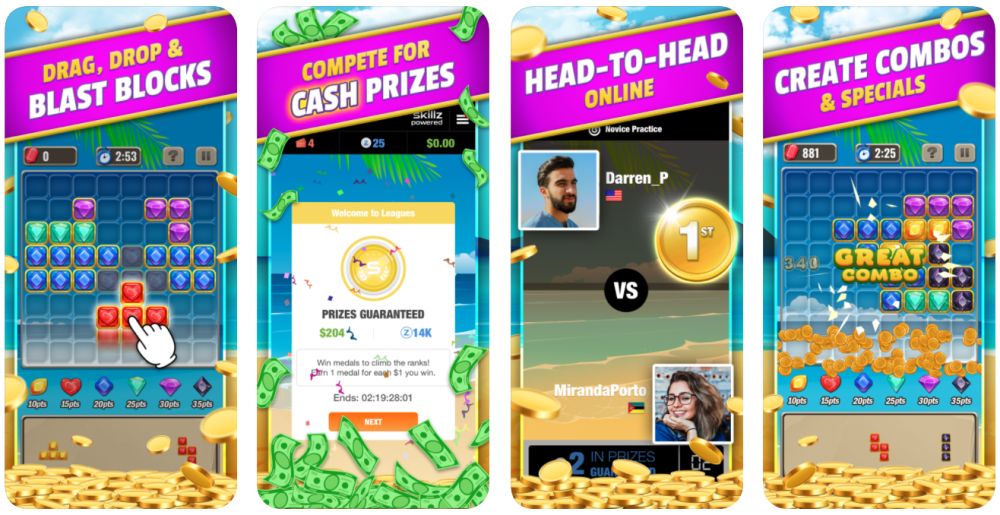 The block puzzle game Jewel Blitz is easy to learn and can be played for fun or for cash prizes in tournaments and head-to-head competition.

Players score points by dragging blocks to the board, arranging them, and clearing rows without running out of room. The game maker describes it as Tetris without gravity.

Higher value cubes can be placed on the board last to complete the row for bonus points. Only three minutes are allowed to beat your opponent.

Whether it’s Solitaire Cube, Blackout Blitz or any other online game you like to play, it doesn’t take long to start playing on a mobile app. You just download the game to your phone and you can start playing solitaire and other games within minutes.

The games are free to try, so you can see which you like the most and then practice your game-playing skills so you can start earning some money.

Just realize, however, that these games probably won’t make you rich. They’re meant to be fun and can fill some spare time while hopefully supplementing some of your income. 0

You’re paying Too Much for your car insurance.

Life Insurance from just $8/month
Pay off debt faster with

The easiest way to
make your money grow

Credit Score Under 700?Apply These Credit Secrets For A Boost!